I have a lot of interior work to finish in the "ATV Shed" and I want to start on that in April when nights are above freezing. And, I want to put seedlings in the greenhouse solarium in April, so I'm aiming to finish a rocket stove  this month.
My bricks are kiln bricks donated by a local potter. Many clearly were used in an arch as they are trapezoids now, not true rectangles. For the feed tube and much of the burn tunnel I used heavy rectangular bricks, but even shaved bricks are still rectangular when laid on their side so they work that way.
NOTE: At some point here I decided not to use the steel pipe for the heat riser because it is so heavy.

Above: The pit for the system is lined with tinfoil as vapor insulation barrier. Wet clay in buckets brought inside to keep it from freezing.
Little portable woodstove is set up in the space with forecast for rain and some snow. Exit is through stovepipe built into wall for eventual rocket stove exit. 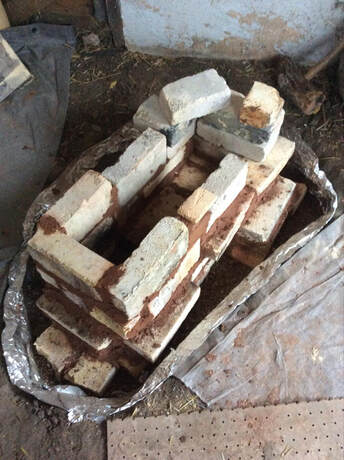 Day 2: One thing the Rocket stove book doesn't mention is that, while it prescribes very accurate measurements for the burn tunnel, it doesn't tell you to compensate for the extra space the mortar will add. The side of the burn tunnel got taller that 7". I think I have to deconstruct it & see if scraping off as much mortar as possible will lower it.
Below left: plan for the manifold.
Regarding heat riser, NOTE: We learn from our mistakes; bricks should have been laid on their side! Thankfully they are insulative kiln bricks so I'm pretty sure it will be fine with a thinner sleeve of perlite.
The metal ring in all these images is temporary. It just helped me shape everything to the exact right circular base for the barrel. I don't know where it came from but it's been in my materials pile for a long time! 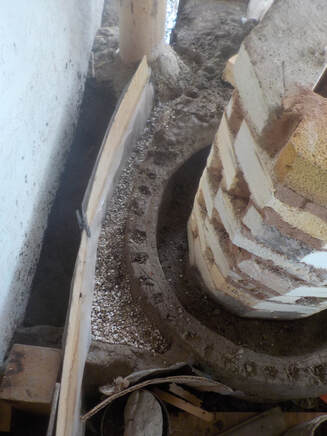 Left: This shows what's going on behind the stove. The white speckled material is insulation: perlite mixed with clay slurry. Then between insulation & wall is tamped soil; why make cob or use up insulation when soil will do the job just fine.
The board separating them allowed me to fill each material without them mixing then slip the board out. Wrapping it with plastic helps it come out better.
A little wall of cob on the end nearest holds it all in.

Note that the deepest cavity here surrounding the heat riser collects gasses that fall into this bottom. It slants steeply towards the exit so ashes fall into the manifold.
Note there are little notches in the cob so that after barrel is placed the cob that locks it in has some tooth to hang onto.

Above: If you notice in this pic the silver pipe cleanout is a corrugated section of duct. I ended up removing this and using smooth section pipe instead. Corrugation creates unwanted disturbance in the airflow (even though this angle isn't in the main flow I thought it best to be on the safe side.)

Finishing most of the ductwork & starting the actual bench 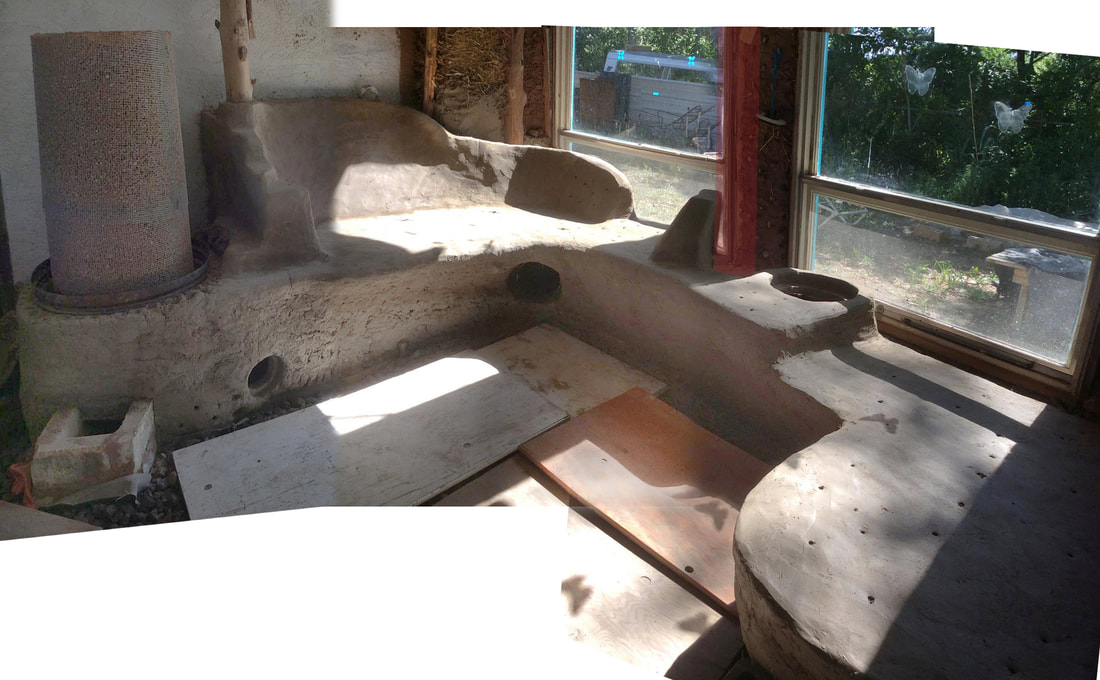 First week in June 2021: Bench cobbing is done! The exit pipe is yet to be cobbed in (once acquired); location shown in red tint. Winter sun will help warm pipe as will backrest/trombe wall though there is a cleanout/prime hole you can see on bench top. Lower right side will be tiled for plants and shelves for spring seedlings.
After finishing the manifold, bench cobbing began about six weeks ago, though a week or two was lost to rainy weather.
All clay has been dug about 30' away on site; this is at my home just outside city limits. I did mix in a little bit of pottery clay for edges which is also the only cob that contains straw. The dug clay starts about 18" below grade (under topsoil & topsoil/clay mix). The pit it left will eventually be made into a living pool (w/cob sauna yet to come!)
This solarium along with adjacent cob sun porch/bench & cob oven are on the south side of a building that is a heated garage/studio space and once the solarium is completely done I'll cut a doorway into the studio.
Lava rock is already in place to insulate the floor, thus the boards laid to walk on.
I use a cement mixer to make cob. It's insanely easier on my body. I dump cob straight from mixer into a wheelbarrow then roll it into where I'll be putting it on.
One ton+ of sand, same amount of clay. I'll be 69 in August & did this 100% solo. Slow but sure 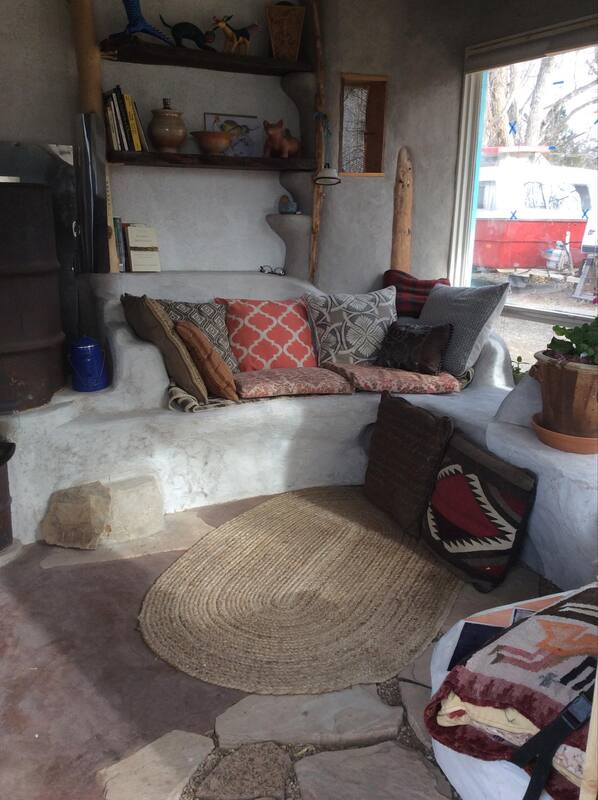