What got me started in this line of work?

By making a building mostly solo, I hope to demonstrate that most anyone can make shelter in a way that fulfills their soul, makes their body strong, exists in harmony with nature, and does not require mortgage payments for decades of their life.
Growing up on the beaches in Southern California my deepest sense of spirituality became tied to the natural world, and for years I also attended Mission San Luis Rey with its six foot thick adobe walls, frescos, massive timber rafters, paintings and statues. Later, as a young art student, I explored rituals as a means of rebuilding our collective psyches' connection to the land.
As an artist I also have what I call "the design brain" which enjoys analyzing problems, in this case the synergy of locale, space, materials and the human body in order to create useful and practical solutions for living.
Our world is in need of alternatives to the use of products that are over-harvested, transported long distances, processed with chemicals and purchased by contractors who construct buildings sold to people who then spend their lifetime repaying debt for shelter that oftentimes is unrelated to sunshine or the land on which it sits–buildings which are becoming more toxic. My passion is creating solutions invested with spirit, understanding, synchronicity, joy, beauty and simple functionality so that we humans can learn to live in harmony with nature. 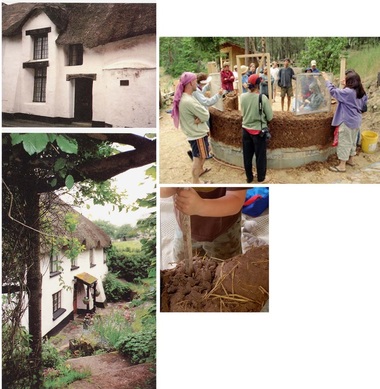 I first read about cob in Natural Home Magazine, how a community in Portland, OR took down their backyard fences and built a cob tea house.
At top right here I can be seen at my first cob workshop, one week at HouseAlive! in Oregon in 2003.
At the left are cob houses in the UK, hundreds of years old (fm Hand Scultped House book). In the past hey mixed cob with oxen and then used a pitchfork to put it onto the walls.
Ianto Evans brought cob to the U.S. in the mid-90's and evolved it into "Oregon cob" (Cob Cottage Company).
Bottom right is 3 yr.-old Carson using a "cobber's thumb" which makes a cohesive massive wall, now referred to in Internation Code as "monolithic adobe". See
https://www.cobcode.org/code-approved
Don't pound the wall to form it or it jostles the rest of the wall.
Keep sides vertical and trim at day's end. Leave a "spine and ribs" on square shoulders to accept next day's cob. If a wall dries, you can spray it then paint with clay slurry just like putting a handle on a clay pot.

Along with using as few industrialized products as possible and learning to value process as much as product, for my rural building I opted to avoid heavy equipment so the site remains as pristine as possible. It takes time and sweat equity, but time allows for learning deeply from the process and sweat...well, it's way better than the gym! Plus there's very little trash generated at natural building sites...I just dumped 3 yrs. worth...less than one curbside trash bin.

I've done a few projects in the last sixteen years listed as pages to the left with a summary seen on the first page.

The most ambitious project is a 199 sq.' building on 35 rural acres, a 30 minute drive from my home in town. A rubble trench foundation was completed on site in 2009. A little timber frame shed was completed summer, 2011 and also the stone retaining wall for site with rubble trench foundation. My daughter Jen built a cob lizard bench which is part of the connected stone piers, steps and drystack walls. In 2012, I completed the stone masonry base with local stone. Summer 2013 recycled windows were purchased and several frames made for them; cobbing began around the perimeter of the building. In 2014 with the help of some family, walls continued to rise and all windows were set. In the fall of 2015 along with cobbing, I hired another natural builder to raise my roof design. In 2016 I worked mostly solo; the north wall reached the roof, electrical conduit was set in the wall and timber framework for the wrap around porch was completed.  As of the pandemic there remains the adobe floor, windows to be put in, repair hail damage to mural wall & get fascia trim on the porch. I got the ceiling 80% up in 2021.
I hope you enjoy the sharing of these projects. Feel free to email me at nathomegal@gmail.com