Work came to a halt mid-October so I could prepare and leave for a trip abroad to see my son. He has been in Oslo, Norway for three and a half years, but given my short span to work during the summer, I haven't been to see him until now. He suggested I should see other parts of Europe, so after we rendezvoused on Mallorca, my cousin and I traveled Spain. Of course I swam in the architecture, buildings that have lasted hundreds of years, made by hundreds of hands.

Before I left I had made an attempt to get the north wall stuccoed but ran out of time. I did manage to get all of the materials ready, though. It's a week after my return and I'm nearly over jet lag, so with a little window of time to work with night temperatures above freezing for a few days and day temperatures very pleasant (somewhat unusual this time of the year), I decided to go up. Things went very smoothly (no pun intended).

The last thing I'd done before putting everything away for the winter was gather all the materials needed for stuccoing, so everything was ready to go. Stucco must come before porch roofing as it would be very awkward to do above the roofing once it's in place. But I realized just today that I don't have to do below porch rafters until later! This will make the job go much faster.

Last day of work on the building for the season:

Though I was all geared up to do some stucco – and I realized I only needed to do from the roof to below porch rafters to be able to get the porch on the north side – very cold nights are coming with Thursday night to be in the teens. Because stucco needs to be kept moist for several days and shouldn't be done in cold weather, alas, I decided not to proceed.
However, I couldn't resist doing a little test strip. I've always heard that nopal cactus is a good additive, so I read up on it in The Natural Plaster Book by Cedar Rose Guelberth and Dan Chiras. We do have nopal – prickly pear – on the mountain, and there's even one that I planted years ago from a section that had fallen off a nearby plant. So I went to that very plant and harvested one leaf/section. I cooked it as directed, and very carefully scraped off the mucilage and added it to my lime stucco.
At the International Straw Bale Conference a couple of years ago I purchased three beautiful Japanese trowels that are being put to service now. They are wonderful!!!
Lastly, I experimented with a fresco design. I hadn't been able to decided on a motif, but as I worked, an idea came to me. As I applied it, it morphed into another design. After it was finished, I realized it is much like the decoration on tile and ceramics in Spain and Mexico too: my giant Mexican coil pot! This is so exciting, it will keep me fueled...until spring... 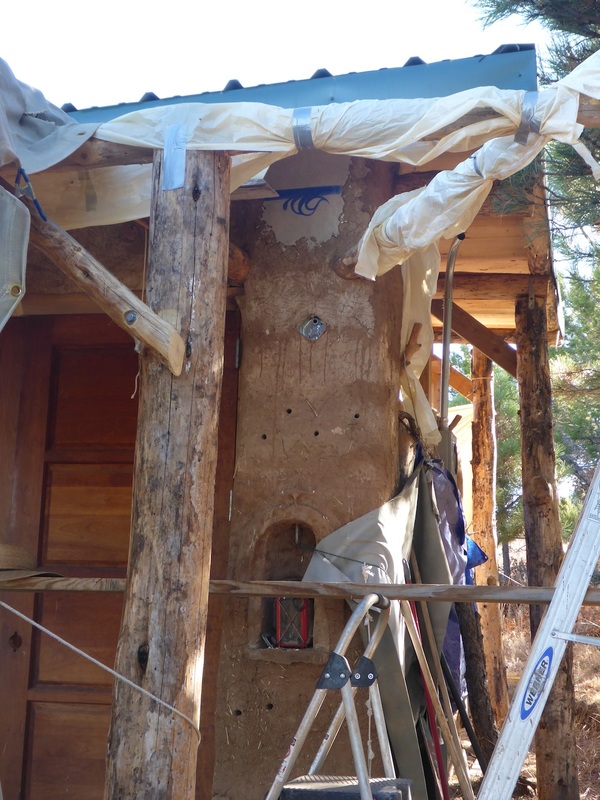 In February we had some 80˚ weather! I did some trimming of a Western Juniper just above the building site which provided wood for a cob oven we built in town in the barrio at a non-profit music house. Then in April we got a lot of snow. Here are some over-winter photos.