Toby Hemingway spoke at COSBA about the five cultures mankind has lived through: 1. Hunter/gatherer 2. Horticulture 3. Agriculture 4. Industrial and 5. Post-Industrial.
With agriculture came two huge changes: hierarchy and overpopulation.
Because of the excess, hierarchy developed to "manage" the excess (ie. ruling wealthy classes). I know archeological digs also know immediately if a culture was agrarian because of their poor health (too many carbs!). Women could also give babies grain year round so they frequently weaned their babies sooner. Because nursing is a natural form of birth control for some women, women had more babies and populations exploded.
So the theory is we need to return to horticulture. I know permaculture also speaks of developing wise integrated systems, but because of the cost of permaculture workshops I have not pursued it in depth.

Though I had no experience with livestock, I have been working to produce some more of my own food via gardens, goats and chickens. It's wonderful to share my life and land with other critters.
I said I wanted goats and chickens and prepared for them, re-roofing the barn w/recycled tin, and everyone asked what kind of chickens I was going to get. I didn't know...and wasn't inclined to do in-depth research. I've basically learned OJT along with some web research. The critters are doing very well. 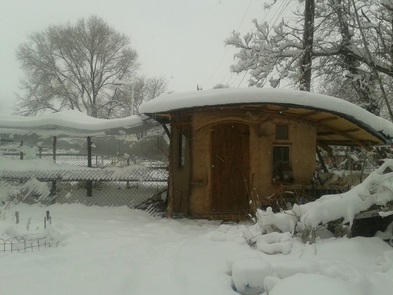 The coop stays about 20˚ above outside night temperatures, plenty cozy f/the chickens. They molted and didn't lay for nearly two months as the days got shorter. I put an infrared lamp in the coop with a timer so it's on a few hours early morning and evening too. They're laying nicely now, 2-3 extra large eggs a day.
The eggs have a natural anti-bacterial coating so it's recommended not to wash them until you use them. The black and white chickens ("Barred Rock" w/ "bars of b&w; from Plymouth Rock) lay the plain brown eggs and the plain colored chickens lay the beautiful aqua ones. All are delicious! 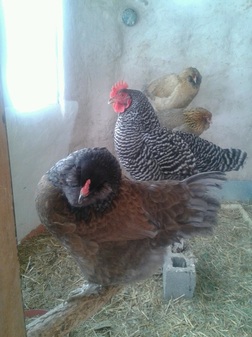 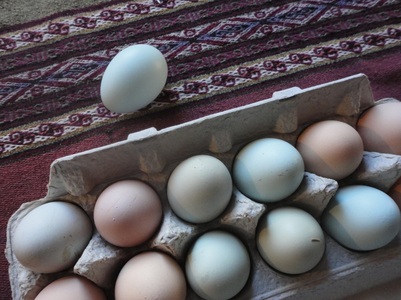 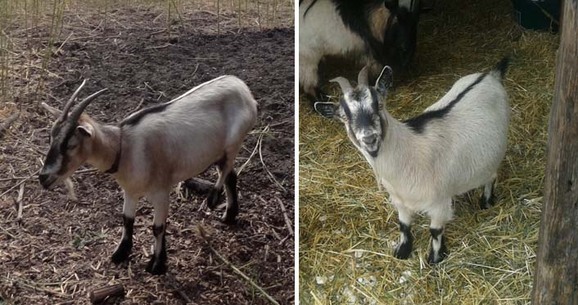 I was given five goats by some people whose house was struck by lightning. This is Janet when I got her and Janet now. A big belly means a healthy goat as they are "ruminating", ie. digesting well in their numerous stomachs.

I learned digesting hay keeps them warm at night, so along with morning goat feed and hay, when not teaching, they also get mid-day hay, and hay between 9 and 11 p.m.  Great goat website: http://fiascofarm.com/ 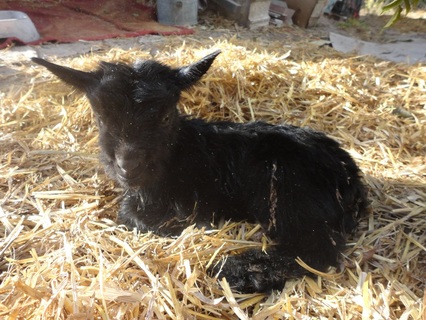 Newborn Casper., b 10/21/11
Little Windy, Casper's mom, was young and pregnant when she was given to me. I wasn't expecting the birth so soon and didn't have her birthing pen completely done. I arrived home one day with two bales of hay only to find a pile of slimy newborn in the dirty poopy goat yard. Windy rejected her.
I separated them from the other goats, forcing Windy to bond with the baby. Then, I wrestled goats for the next two days, cleaning clogged nipples, forcing her to let baby suckle, finishing their pen including semi-insulated cubby, making sweater f/baby (it dipped to single digits when the baby was less than a week old), putting warm water on mama's udder to make milk flow, sealing them up in warm cubby at night.... 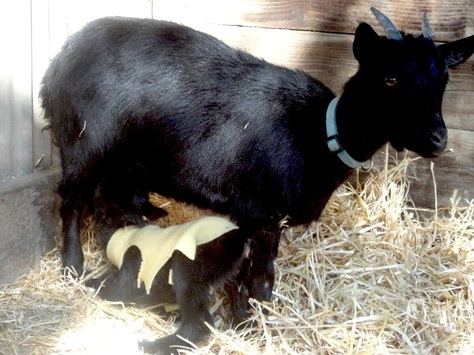 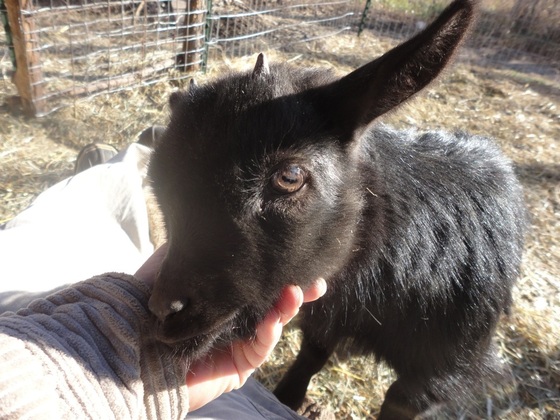 Two months old, sweet baby Casper. Windy's udder seems really small...I think she may have already weaned Casper.
So much for milk...
I have yet to build milking station, but this will come in time. I'm hoping for a resident goat herder and gardener so I can concentrate on my natural building this summer. Interested?

I'm not a natural green thumb, but am blessed with a half share of irrigation water and a site that used to be a horse corral so it is nitrogen rich. After reading about the ecosystems in soil, I did not want to till, so rather did a "lasagna garden" of sorts. Instead of layering, though, I mixed peat moss, compost, manure, topsoil and some charcoal which was put on top of wet cardboard. First season, almost no weeds!
I get good tomatoes, peppers, eggplants and cukes. I want a little bean field, asparagus, and beets....better do ph test next year...
This is an heirloom tomato. One slice per sandwich!

Nothing like home-grown food! I froze a lot of peppers and tomatoes f/winter. 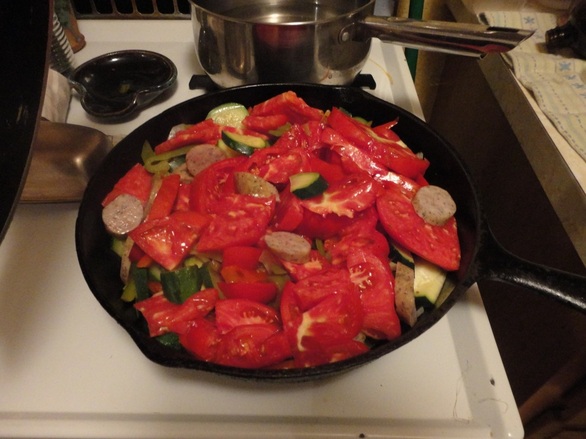 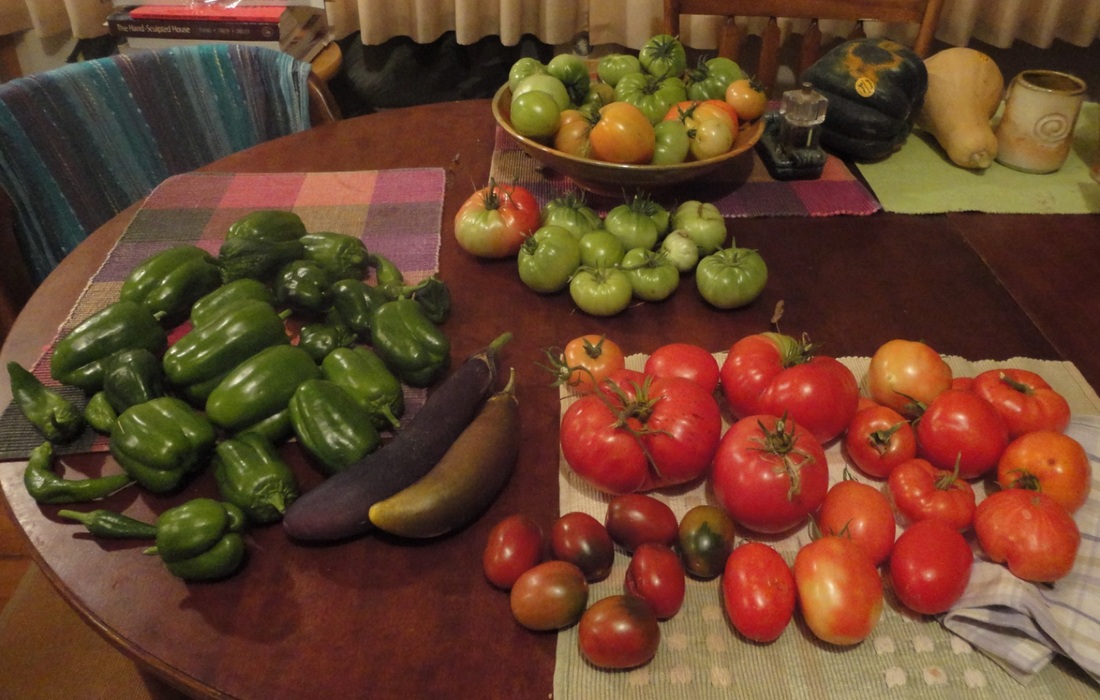